In 2012, children from the Ministry of Stories declared Shoreditch an independent state-within-a-state to be run by young people, complete with a constitution, manifesto and national anthem. Every aspect of the Republic was designed by children, and was the culmination of a year of hard work and creativity.

‘Dear Citizen! We have made a new country called The Children’s Republic of Shoreditch. It is run by children and it has a postal service, a spy network and an embassy. We have been working on it for months now. We are making this country because we believe that children can be free and everyone is allowed to have fun. Please don’t think we are just a bunch of kids mucking around, we are serious.’

Children from the Ministry of Stories designed their own embassy from which they ran the Republic’s affairs.

A declaration of independence

The Hoxton Street embassy was open for two months during which time members of the public could visit and:

Children corresponded with prominent people in the British political establishment, including David Cameron, Boris Johnson and the Queen, seeking to establish strong relations. 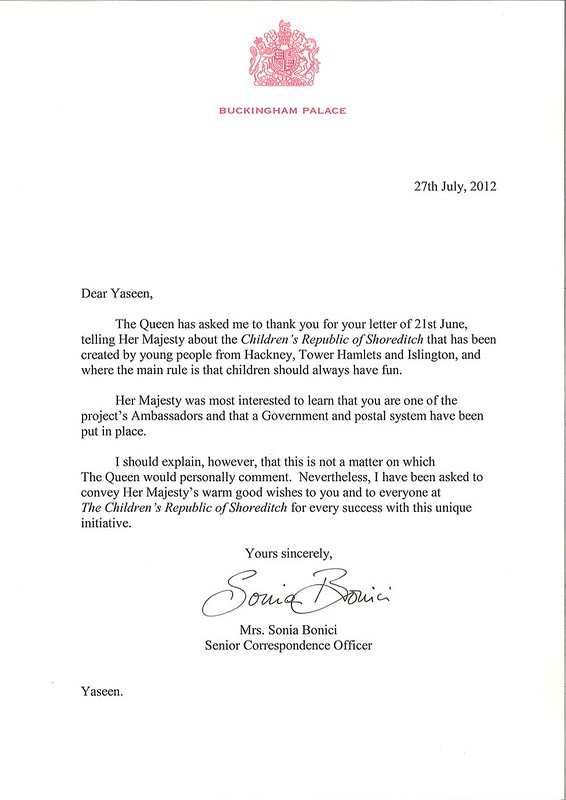 Young writers built an impressive fleet of poetry cars to ferry themselves around Shoreditch as its Poet Laureates, while it’s young mythologists wrote a myth to explain the perplexing problem of Why Adults Are So Boring (and therefore why setting up a Children’s Republic was the right idea in the first place…)

The project finished with a closing ceremony at which we released on balloons miniature letters written for the postal service so the words and the spirit of the Children’s Republic could be spread far and wide. (If you receive a letter, please let us know.)

Children’s Republic in the news

Adult-run, UK-based media outlets Hackney Gazette and the Guardian sent reporters to learn more about the Children’s Republic of Shoreditch.

The idea for the Children’s Republic came about through the Ministry’s work with children in 2011-12, encouraging them to write, talk and think about how life would be different for them if they were in charge, and what they would like to change.

The embassy was a place where children’s imaginations were physically realised and offered them the chance to interact with the creative decisions that they had taken through the conceptual stages of the project.

Co-founder of the Ministry of Stories, Nick Hornby said:

‘The Ministry of Stories has always aimed to challenge the traditional ways that children interact with education. The Children’s Republic of Shoreditch aims to give young writers further opportunities to explore questions about their identity and locality: what’s it like to be who they are in the place that they live and what might they like to change to make their life better?

It also gives the community’s adults an opportunity to better understand the young people around them. And, since the project is open to the public, the Children’s Republic of Shoreditch offers a rare opportunity for visitors to experience and celebrate what children’s imaginations can create.’

Burgess Studio and all our volunteer writing mentors.

NEXT PAGE: The Story Engine